The Urge to Make Aggressive Statements at Any Possible Occasion

And now for something completely different!

I am not really fit to have an opinion on fashion, let alone criticize the sartorial choices of others. My only advice would be: "If you can't afford designer clothes, wear black." Luckily, black goes very well with my colours. When I buy shoes, I always buy expensive and classy ones to wear them for decades. I buy, too, good clothes and have forgone about 10 years ago to wear short skirts. I thought that it would be better I do it while people regret that I do it instead of wishing I'd do it. I think long skirts and pumps look very dressy. The fact that I do not like patterns and prints adds to the lucky circumstance that I can wear my duds for many years without looking too obviously out of place. And to reveal one of my dark secrets: I have a "thing" for ball gowns and evening dresses and own several I have never, or only once, worn. Apart from that, fashionistas can bite me!

But I will explode if I don't say something about Michelle Obama's sartorial choices. That is not because I find the hype about dressing matters worth adding to, but because the hype about the Obamas, who seemingly can't do wrong in the eyes of the world (at least of my part of the world) creeps me out. Here we have examples from the gutter-, as well as from the "quality" media.

Michelle Obama isn't a bad looking woman, or at least she wouldn't be, weren't her resentful nature written all over her face. At almost six foot, slim and trim, with great legs and arms and a curved figure -- far from the clothes rack appearance of most "supermodels", one should think she couldn't do much wrong in the sartorial field, yet she goes from bad to worse to the sycophantic acclaim of the world.

At her husband's inauguration she wore a cat-sick-yellow (widely described as "golden") thing with ugly texture and an even more ugly meant-to-be "decorative" neckline, together with cow-pat green, voluminous leather gloves. 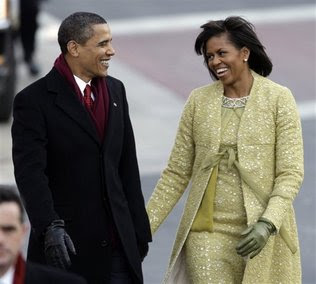 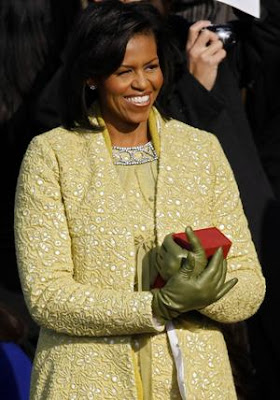 At the inauguration ball she wore a dress that looked like a wedding dress for a teenage- or early twenty-ish bride from one of the cheaper off-the-rack lines. 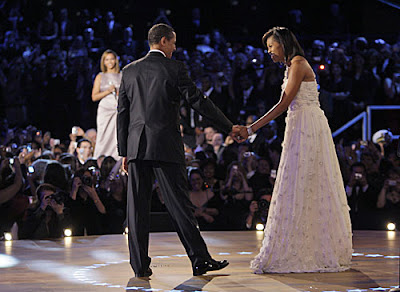 To be realistic, that was only what we could expect. I mean... look at the dresses in the pictures below. The first one resembles a Haloween-horror costume, the second would be alright, albeit a bit too tight, weren't it for the colour that would suit hardly any woman's skin tone, and the purple and black colouring of the third, together with the cheap-looking accessories, is a mess as well. 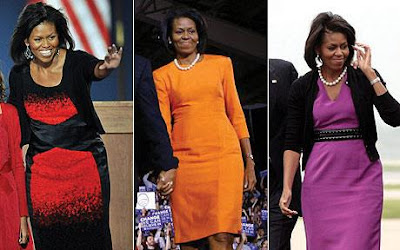 The Obamas are not the only megalomaniac phonies who like to be compared with the Kennedys. The futility of the claim is obvious. 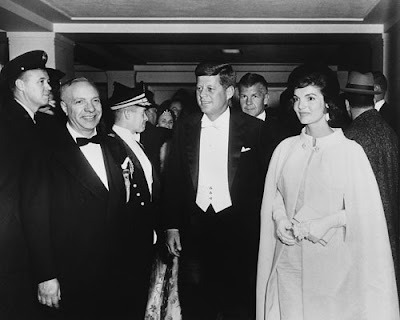 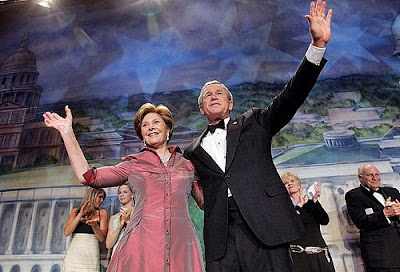 To prove our lack of political bias, here is Laura Bush at the same occasion. Nobody has ever accused her of being well dressed, but THAT even beats Michelle Obama's blunders by several lengths. 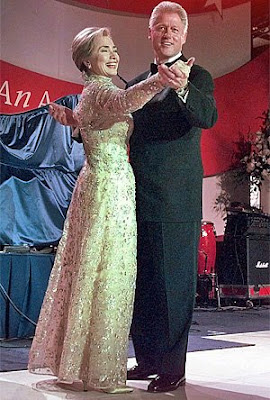 Hillary at her husband's second inauguration ball: Perfect! She must have a whole staff of extremely competent advisers. Now she is a political heavy-weight herself, she is one of the few female politicians, maybe the only one in the higher echelons of that class, who has escaped the trap of appearing either as butch or simpering. I just wish she would just sometimes wear a skirt. 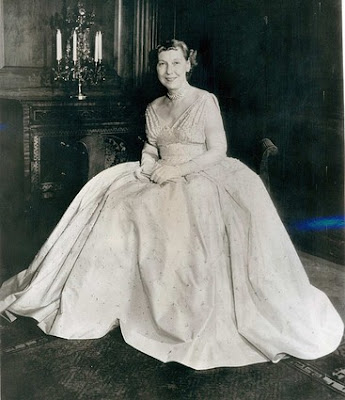 Mamie Eisenhower in her inaugural ball gown: Timeless chic! I am glad that this is a black-and-white photo, though, because I have a hunch that the dress was in that awful pink she so loved. 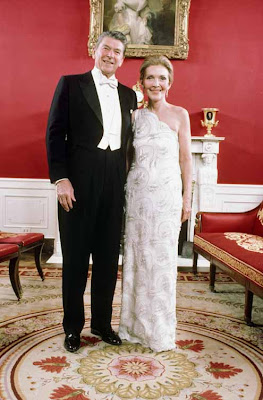 Nancy Reagan: Very nice -- for a woman thirty years younger. It is fair to assume that this influenced Hillary's above choice of an inaugural ball gown.

But back to the Obamas. I seem to remember that Jackie Kennedy was much criticized for her choice of French over American designers, when all the world is gushing ecstatically now over Michelle Obama's thirde-worlde-chic. To suppress her urge to make an -- aggressive -- statement at any possible, and impossible, occasion would do her appearance a world of good.